You may know of saffron as the spice used to flavor dishes like bouillabaisse and paella, but saffron extract has a long and varied history in herbal medicine spanning over 2,500 years. According to a review study from 2014, it’s been used in various countries to treat skin disease, respiratory issues, poor vision, pain, mental illness, gynecological problems, erectile dysfunction, and infections.

Derived from the crocus flower (Crocus sativus), saffron is a perennial stemless herb that’s largely cultivated in Iran and some other countries including Spain, India, and Greece. The flower of C. sativus is a light purple, but it’s the thread-like reddish-colored stigma of the flower, where the pollen germinates, that’s valued both as a spice. It takes about 36,000 flowers, which are harvested by hand, to yield a single pound of stigmas. Over 200,000 dried stigmas (obtained from about 70,000 flowers) yield 500 grams of pure saffron. Due to the cultivation, harvesting, and handling, saffron—which can cost around $260 an ounce in the American market—is the most expensive spice in the world. Hence the reason it’s often referred to as “Red Gold.” 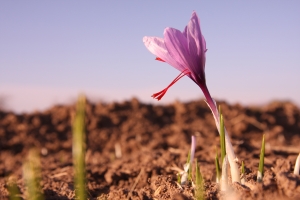 More than 150 chemicals are present in saffron, but the key ones are crocetin and crocin, picrocrocin, and safranal, which are responsible for saffron’s color, taste, and odor.2 These compounds are all strong antioxidants, molecules that protect cells against free radicals and oxidative stress, and scientists propose that many of saffron’s beneficial effects can be attributed to them.

Saffron has been shown to be helpful in several diseases, and according to a review study from 2015, it’s time to move into more advanced stages of study or to even develop a drug for the use of saffron in the treatment of depression and Alzheimer’s disease. However, there’s much weaker supporting evidence for most other proposed uses, including preventing or treating cancer, reducing cholesterol and other cardiovascular benefits, and improving skin. 5Here’s a look at some findings on the key benefits of saffron from the available research:

In a 2014 study published in the Journal of Affective Disorders, adults with mild-to-moderate depression took either a saffron supplement or Prozac daily for six weeks.8 At the study’s end, the saffron extract was found to be as effective as Prozac.

In a 2015 study published in the Journal of Affective Disorders, adults with major depressive disorder took crocin (an active constituent of saffron) or a placebo along with Prozac (fluoxetine), Zoloft (sertraline), or Celexa (citalopram), selective serotonin reuptake inhibitor drugs (SSRI) that are commonly used for depression. Results revealed that the group taking crocin had significantly improved scores on self-reported assessments compared to those taking the placebo.

A review of six clinical trials with placebo or antidepressant controls published in the Human Psychopharmacology in 2014 concluded that “research conducted so far provides initial support for the use of saffron for the treatment of mild-to-moderate depression.” The authors found that saffron extract had a large treatment effect when compared to a placebo and was as effective as antidepressant medication. 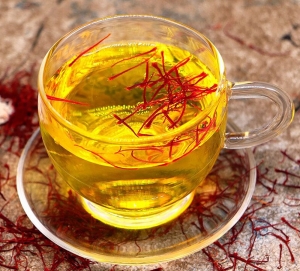 When studied on teenagers with mild-to-moderate symptoms in a 2018 study, however, the improvements in anxiety and depressive symptoms that the adolescents reported after taking 14 mg of saffron twice a day for eight weeks were inconsistently corroborated by their parents.

When used as a weight-loss aid, saffron supplements are purported to curb appetite and reduce cravings. Some proponents suggest that saffron increases brain levels of serotonin and, in turn, helps prevent compulsive overeating and the associated weight gain.

Saffron extract shows promise as a means of controlling compulsive eating, according to a small study published in Nutrition Research in 2010.11 For the study, healthy women who were mildly overweight took either a saffron-containing supplement or a placebo every day for eight weeks. Caloric intake was unrestricted. Study results showed that members of the saffron group experienced a significantly greater decrease in snacking and a significantly greater reduction in body weight compared to members of the placebo group. The study’s authors note that saffron’s supposedly mood-enhancing effects could contribute to the decrease in snacking frequency.

Saffron is added as an ingredient in some vision supplements, and several small studies suggest it may be beneficial in the early stages of age-related macular degeneration.

In one randomized, double-blinded, placebo-controlled crossover trial published in 2018, adults with mild-to-moderate AMD were given 20 mg of saffron or a placebo for three months. Researchers concluded that saffron modestly improved visual function and that due to the chronic nature of AMD, longer-term supplementation may produce greater benefits.12 In another early study published in 2016, daily supplementation with 30 mg of saffron for six months was associated with statistically significant changes in retinal function in patients with both dry and wet AMD.6

Preliminary research suggests that saffron may inhibit the aggregation and deposition of beta-amyloid plaques in the human brain and may, therefore, be useful in Alzheimer’s disease. In two random, double-blind, controlled clinical trials on patients with mild-to-moderate Alzheimer’s disease, saffron improved mental function. In the first study, patients were treated with 30 mg of saffron (15 mg twice a day) or placebo for 16 weeks. In the second study, patients were treated with either 30 mg of saffron (15 mg twice a day) or five mg twice daily of the drug Aricept (donepezil) for 22 weeks. In both studies, the authors reported that saffron produced a significantly superior outcome on cognitive function than the placebo. They also showed that the effectiveness of saffron on improving the cognition score of Alzheimer’s patients was equal to that of Aricept.

While the mechanism of action of saffron on sexual function is unknown, a 2018 review of six articles found that several studies reported its usefulness on five dimensions of erectile dysfunction, including erectile function, sexual desire, orgasmic function, intercourse satisfaction, and overall satisfaction. However, researchers found contradictory effects on semen in infertile men.13

Saffron extract may help relieve symptoms of premenstrual syndrome (PMS), according to a 2008 study from the British Journal of Obstetrics and Gynecology. After taking saffron supplements daily throughout two menstrual cycles, study participants had a significantly greater decrease in PMS symptoms than those who took a placebo for the same time period.14

Although saffron is considered safe for most people when consumed in the small amounts typically used in cooking, use of saffron or saffron supplements may trigger mild side effects. In smaller doses of 30 to 50 mg, which most studies used, side effects mostly include nausea, vomiting, dizziness, and dry mouth. Study authors report no significant difference between saffron and placebo when it comes to side effects.

As documented in traditional medicine, saffron had been used for abortion, and in high doses (five grams) it’s been shown to be able to induce uterine stimulants and have estrogenic effects in animals. As a result, you shouldn’t take saffron if you’re pregnant. In one study among healthy women, taking 400 mg of saffron daily for seven days caused abnormal uterine bleeding in two women.

Authors of one review study could not find any study on the interactions between different drugs and saffron. However, they suggest a cautious approach for using saffron in people under anticoagulant (blood-thinning) therapy or those having certain types of kidney disease.

As with any supplement, if you’re considering using saffron for health purposes, talk with your healthcare provider first to weigh the pros and cons. Also, keep in mind that self-treating a condition like depression and avoiding or delaying standard care may have serious consequences.

As a dietary supplement, up to 1.5 grams of saffron can be safely taken per day. It’s considered toxic when ingested at doses higher than five grams and could be lethal at doses of more than 20 grams a day.

Clinical studies have evaluated doses ranging from 20 mg a day to 400 mg a day, though the most common effective doses being applied in clinical trials are 30 mg to 50 mg a day.

Health Benefits Of Pistachio And Its Side Effects