Barberry (Berberis vulgaris) is a bush native to Europe, Asia, the Middle East, and North Africa that’s been naturalized to many regions of North America. The berries of the barberry are traditionally used to make jams and jellies. But the herb also has a long history as a folk remedy for digestive disorders, including constipation, diarrhea, dyspepsia, heartburn, and loss of appetite. It was thought to increase the flow bile, which is why it was used for liver and gallbladder problems. Topically it was recommended to treat skin conditions like eczema, psoriasis, and acne, as well as minor wounds

The active constituents in barberry are thought to be the isoquinoline alkaloids, particularly berberine. Alkaloids are a class of naturally occurring organic nitrogen-containing bases; other well-known alkaloids include morphine, strychnine, quinine, ephedrine, and nicotine. The alkaloids in barberry are found in the root, rhizome, and stem bark of the plant. Other herbs that contain berberine are goldenseal (which has a higher concentration of berberine than barberry), the Chinese herb Coptis, and Oregon grape. 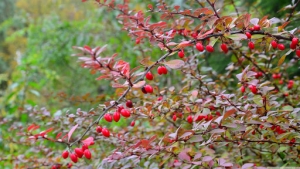 Though there are studies of berberine that may apply to barberry, evidence for any health benefits for barberry is extremely weak. Any benefit likely relies on the fact that it contains berberine, for which medical uses are being established.

For instance, scientists have investigated berberine’s traditional use in fighting infections. According to a 2008 review article on natural approaches to preventing and treating infections of the lower urinary tract, berberine extracts demonstrate significant antimicrobial activity against a variety of organisms, including bacteria like Chlamydia, viruses, fungi, and protozoans.3

The Chinese have used berberine-containing herbal remedies for more than 3,000 years, and berberine is an over-the-counter drug in that country for the treatment of gastrointestinal infections, such as bacterial diarrhea. In 1988, the hypoglycemic effect of berberine was discovered when berberine was used to treat diarrhea in diabetic patients in China.

The Natural Medicines Comprehensive Database (NMCD), one of the most reliable natural medicine resources available, rates berberine as “possibly effective” for a range of conditions.4 Here’s a rundown:

Research shows that applying a gel containing berberine can reduce pain, redness, oozing, and the size of ulcers in people with canker sores.

Berberine seems to slightly reduce blood sugar levels in people with diabetes. The results of one pilot study on 84 patients published in 2008 suggest that taking 500 mg of berberine two to three times a day for up to three months might control blood sugar as effectively as metformin, the first-line drug for type 2 diabetes.6 In addition, berberine showed a favorable influence on cholesterol, unlike metformin, which has barely any effect. As the authors of a review article from 2015 noted, “with little documentation of adverse effects, berberine is positioned as a potential candidate drug to treat type 2 diabetes.” 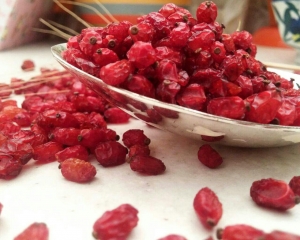 Research suggests that berberine can lower blood sugar, improve cholesterol and triglyceride levels, reduce testosterone levels, and lower waist-to-hip ratio in women with PCOS, a hormonal disorder common among women of reproductive age.10 In some women with PCOS, the drug metformin is prescribed to prevent diabetes from developing (women with PCOS have been shown to have higher levels of insulin when compared to women of the same weight without the condition). Some research shows that berberine can lower blood sugar levels similar to metformin, but berberine seems to improve cholesterol levels better than the drug.

Barberry enthusiasts recommend introducing yourself to the berries by having them in sauce, jelly, juice, wine, or tea. You can also try substituting some barberries for raisins or cranberries when baking (barberries taste sourer). Barberries (also called zereshk) can be purchased at Mediterranean or Middle Eastern grocers, some health-food shops, or on the Internet. To maintain color and quality, be sure to refrigerate the berries. 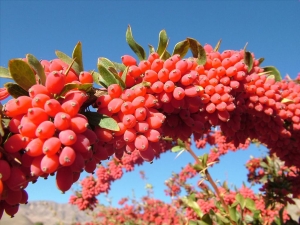 Barberry is available in tea, tincture, capsule, fluid extracts, dried herb, and tablet forms, as well as a topical ointment. There is no established daily dosage for barberry: Recommendations range from two grams to six grams of the berries or an equivalent amount in extract form.15 Barberry extracts are standardized to contain 8% to 12% alkaloids, of which berberine is the most prevalent. However, it’s not clear that barberry provides enough berberine to produce any purported potential benefits.

In large doses, barberry may cause vomiting, diarrhea, convulsions, and dangerous drops in blood pressure, heart rate, and breathing.16 Do not take barberry without discussing it first with your physician especially if you take anticoagulants (blood thinners), blood pressure medication, diabetes medication, diuretics (water pills), antibiotics, and antihistamines. Barberry may decrease or increase the effectiveness of these and other drugs. For example, one study published in the European Journal of Pharmacology found that berberine elevated the amount of the drug cyclosporin A in kidney transplant patients. 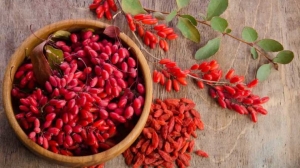 An overdose of barberry can result in kidney irritation.18 Symptoms of kidney problems are bloody urine, pain when urinating, low back or stomach pain, and fever. Seek medical attention immediately.

Barberry should not be used to replace conventional treatment. In particular, it shouldn’t be used as a home remedy for UTIs. If the bacteria aren’t fully eradicated, the infection may spread to the kidneys, even though symptoms, such as difficult or painful urination, may disappear.

Pregnant women should not use barberry because it may stimulate uterine contractions and cause miscarriage.18 The safety of barberry in nursing women and children is unknown and should be avoided.